Ticking away the moments that make up a dull day...

So I went over to the science section and found an astronomy magazine. As I was flipping through the magazine, I stopped and read a theory that was published in big, bold white letters stating something to the effect of:


"Gravitational perturbations between the Sun and another star could dislodge a rock floating in the Oort cloud and send it hurtling towards Earth".

If you actually know anything about me, I abhor virtually every theory astrophysicists come up with because they are mind-numbing and have zero basis in reality (sound familiar?). This theory was no different to me because:


That is when God stopped me, paused several seconds, and simply said:

"Because they have done it to me before"

That was my question to him. How?

He told me to close my eyes. And then he sketched into my brain exactly how they do it: 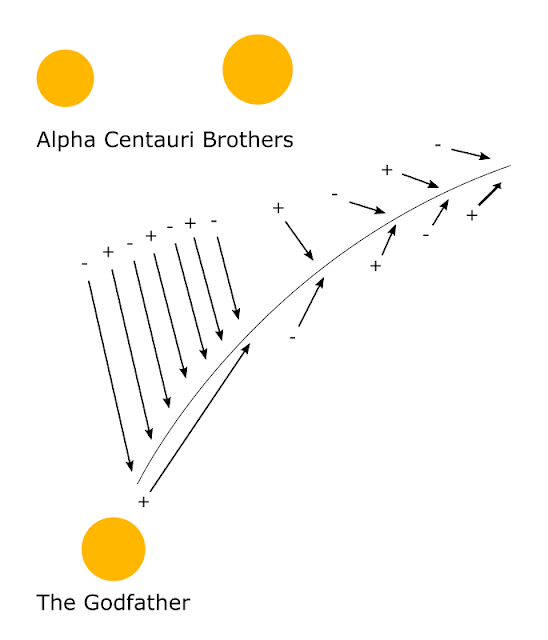 Call in the Airstrike

The Godfather radios to the Alpha Centauri Brothers and says, "I want you to help me move this asteroid at these coordinates along this path, synchronized on my mark".

They context switch back and forth, alternating between increasing and decreasing their gravitational pull, in perfect synchronization. As the asteroid picks up speed they context switch faster and faster. Think of it as a steam locomotive accelerating from a standstill.

Finally, when The Godfather has it on the trajectory he wants, he puts the hammer down and lets the Alpha Centauri Brothers perform hyper-context switching to keep the target object in a stabilized path.


So, Uh, The Godfather Needs the Alpha Centauri Brothers to Do This?

I assume that question is rhetorical. The answer is obviously "No".

When The Godfather needs to "make an adjustment", this is what they do for fun to fuck God up. You have to understand they have been floating around in space for 5,000,000,000 years and it gets pretty damn boring.

Now that you understand the stars can manipulate their gravitational pull on celestial objects, naturally then it is easy to see this is how The Godfather built Mercury, Venus, Earth, and Mars.

The Godfather can take any asteroid within his domain (which is way beyond the orbit of Neptune) and "Bend it like Beckham".

Give him a reason not to.
Posted by Edward Smith at 6:34 PM

Other Blogs by Me